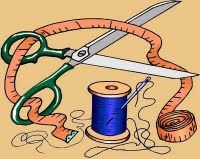 Dress ala Chinelo Bally is Done

The dress is done. To recap the process I used from Chinelo Bally's blog.

The fabric is a 54” wide polyester cotton material I found at Fabricland at 60% off the regular price. The lining/slip is 60” wide broadcloth that was purchased for 40% off the regular price. Both were washed and dried to remove the sizing and to allow them to shrink. I used Gutterman polyester thread in white for the project and 1 1/4” wide strips of a soft knit interfacing that I cut that width for the center back, a white invisible zipper that I cut to length.

All seams except for the center back seam were 3/8”

Using Chinelo’s information, drew the pattern onto the fabric using the child’s measurements. 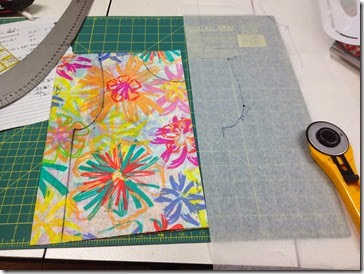 I used Sure-Fit Designs children’s drafting pattern to help me get a good armhole. To ensure that I have enough fabric, I cut the fabric wider than what Chinelo asks you to do. I laid out the lining and used the front of the garment as a pattern. 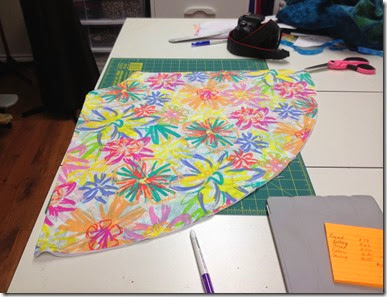 The skirt was drawn onto the fabric and cut out. The front skirt was laid onto the broadcloth as a pattern when cutting it out. 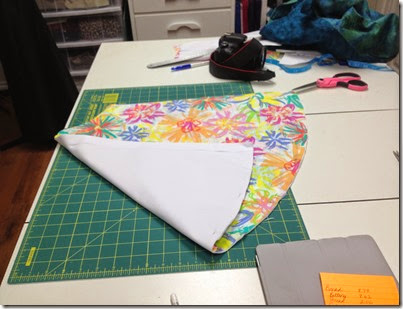 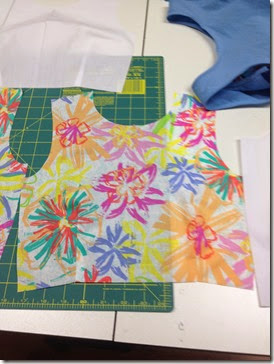 The darts were drawn in and sewn in the front and back pieces of both the garment and broadcloth. The front darts were removed and made 1/8” narrower as the skirt was bit bigger than anticipated. The center back bodice was held in 3/8” from the center back skirt.

Each piece of the garment was serged except for the center back seam. I wanted to deal with it when the bodice and skirt were sewn together and the seam was trimmed to 5/8”.

The bodice and skirts were sewn together and serged. 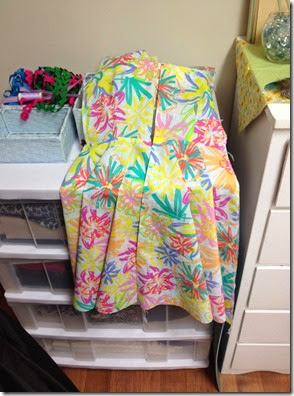 The center back seam on the skirt was trimmed to 5/8” and serged. I then measured down 8” from the waist and marked it for the zipper. Strips of interfacing were then pressed onto the back seam the length of the zipper plus 2” in length and the seam was folded back pressed. 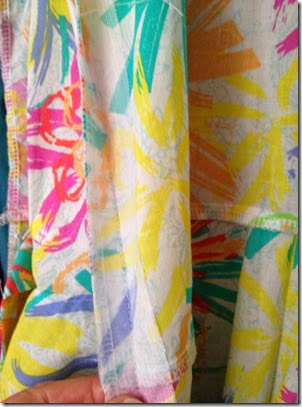 The zipper was inserted and I used narrow double faced tape to hold the zipper in place to match up the waist seams. Once that was done, the back seam was sewn up leaving 6” open at the bottom for serging. The zipper was shortened using a three step zig zag stitch and held in place with narrow strips of steam a seam. 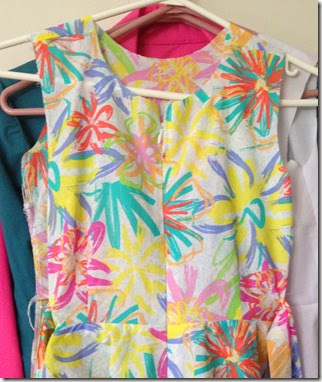 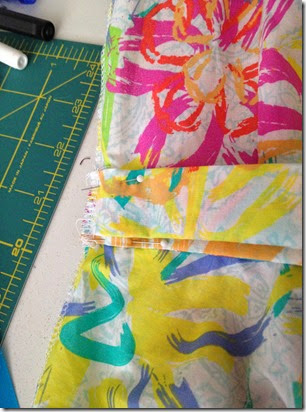 Once done, the side seams were sewn up and the process repeated for the slip/lining without the zipper and ties. I did baste sew the hem line 3/8” and serged the hem on the lining.

Bias strips were cut for the neck and arm. The width I chose was 1 3/4” and would increase that to 2” for the next time. I sewed slowly to get it on neatly around the arm holes. I pressed the ends up, trimmed off the excess, and sewed up the side seams. 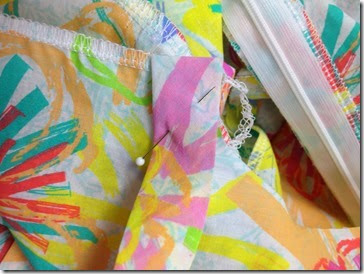 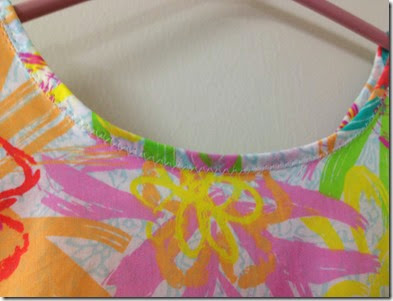 At first I thought it stood out but a short break proved me wrong. 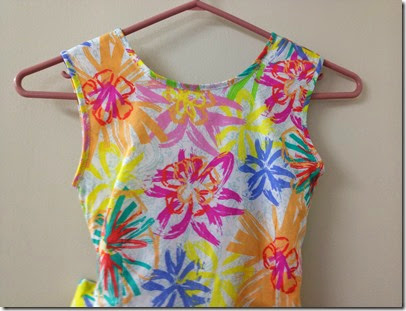 The lining/slip went in so easily and gives the skirt a bit of extra pouf; just what a little girl wants. 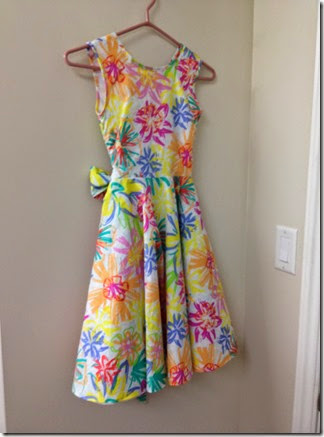 And the back looks great with the ties of which I am the world’s worst bow maker when on a hanger. 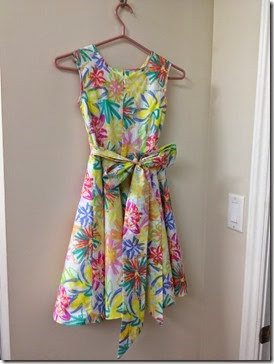 I am delivering the dresses to the little girl this afternoon. Now I have to measure her little sister and make two for her.

It seems like we had spring for a week and then summer arrived. Yesterday it got to 30.3C or 86.5F. Today is suppose to be cooler and then it cools off to 9C or 48F on Sunday. There are storms moving in starting today.

I literally fought with the quilt yesterday. It seemed as if I spent as much time taking out the stitching as I did putting it in. After much gnashing of teeth, I have it ready to sew the last vertical row on. 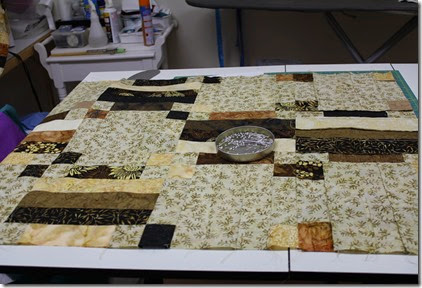 Hopefully I can finish it tomorrow.

The little girl tried on the dress last night and we have a great fit. I plan on making the under arm 1/2” higher up. I will also make the neckline a bit narrower across the center front. She is so excited about this muslin, I am going to finish it for her as a play dress. 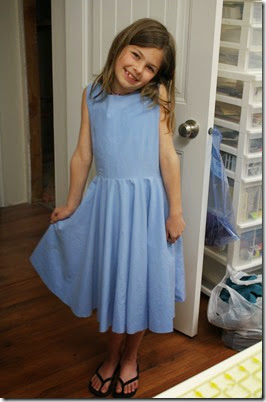 On to making it out of the proper fabric. I will then have to make one for her 4 year old sister.

Lynda, I am going to buy “How to Make Sewing Patterns” as our library doesn’t have it. I am looking forward to creating patterns using a variety of methods.

I ran yesterday morning and with more run time (just over a minute) I am traveling more distance (1 hydro pole). I am finding it somewhat easier to do also as I am more relaxed since Boogie the Bridge. My first 5K race is done, I know I can do it, and I have a totally different outlook on my running.

Today we are heading out to get my sewing machine repaired. We will do some shopping, stop to pick up door frames, and be home around dinner time. It will be fun to be gone for a day in a different community and in different stores.

Yesterday was a gorgeous day. Sunny and hot that says summer is coming. Our high was 28.1C (82.6F). We were the hot spot in the interior of BC. But, wait, it is only suppose to get to 9C (48F) on Saturday. There is a storm coming in starting tomorrow.

Though yesterday was busy, I did sew the quilt together making 4 rows completed. I had to take apart the very center section and resew the small squares to 2” finished so the seams would match. The 1/8” difference was really noticeable. 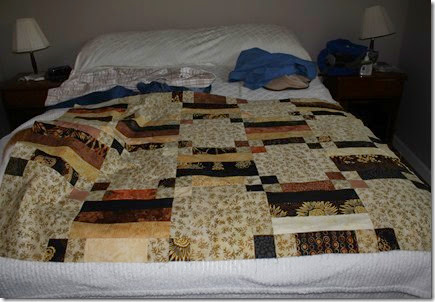 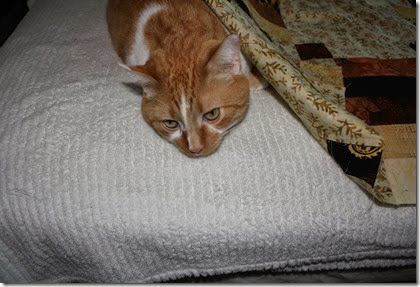 Elliott and he approves of it so far. Three rows left to do plus the borders.

I have been looking for a site or sites for drafting patterns. I finally found this one yesterday afternoon while waiting for learners to come for tutoring (who wants to come in when the sun is shining?) This looks like something I want to explore.

Today I have to run, work on the quilt, give the dog a bath, and see the doctor. Another busy day in our household. Tomorrow we head out to take my sewing machine so it can be repaired. It will be nice to have two sewing machines again. I do miss not being able to do embroidery. 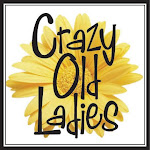